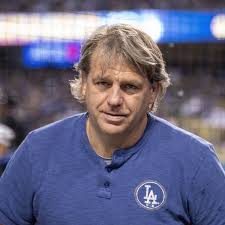 Chelsea will be under new ownership from Monday after a three-month process, with the Todd Boehly-led group agreeing to buy the Blues for £4.25 billion.

Chelsea Football Club will be under new ownership starting from  Monday, after a consortium led by Todd Boehly, a US billionaire, struck a definitive agreement to buy the club from Roman Abramovich for £4.25 billion.

The club issued the following statement: “Chelsea Football Club can confirm that a final and binding agreement to sell the club to the Todd Boehly/Clearlake Capital group was reached last night.

On Monday, the transaction is anticipated to be completed. At that time, the Club will provide additional information.”

Abramovich made the surprise decision to sell Chelsea after 19 years as an owner at the start of March, just a week after Russia invades Ukraine.

The UK government sanctioned him eight days later, and Chelsea was given a special license to continue operating on a day-to-day basis.

That was set to expire on May 31 — and thus began a race against the clock to complete Chelsea’s takeover.

The Raine Group, a US merchant bank, oversaw the club’s sale, narrowing down several possible buyers to a four-consortium strong shortlist.

Those engaged in the process saw the Boehly bid, which was backed by investment company Clearlake Capital, Swiss billionaire Hansjorg Wyss, and Mark Walter, as a serious candidate from the start.

It was also crucial that they were willing to accept Abramovich’s various demands to safeguard the club’s immediate future.

However, the Premier League and the UK government had to approve it.

And the latter was determined to ensure that Abramovich did not profit from the club’s sale, even though the Russian has won 19 titles in the 19 years since he arrived at Stamford Bridge.

On Tuesday evening, it was reported that individuals in the Todd Boehly consortium had passed the Premier League’s owners’ and directors’ test, and the UK government issued a statement on Wednesday morning approving the sale.

“Following thorough research, we are now confident that the entire sale proceeds will not benefit Roman Abramovich or any other sanctioned individual,” the statement added.

“We will now begin the process of ensuring that the earnings of the sale are utilized to benefit victims of the war in Ukraine.

“The actions taken today will ensure the future of this vital cultural asset while also protecting football fans and the wider community.

We’ve been in talks with appropriate international partners about obtaining the requisite licenses, and we appreciate their help.”

One of the first items on Todd Boehly’s agenda will be to provide financial support to men’s first-team head coach Thomas Tuchel.

Other positions must be strengthened as well.

Chelsea’s head coach stated, “We have to be quick and smart.”

“We are currently at a significant disadvantage – but this is not yet decisive.

Of course, it’s disappointing right now since our hands are bound and we can’t do what we want.

“We have a good concept of what these athletes’ profiles and attributes will be.

But it’s not as if we put a player’s name on a list and then go fetch him.

We must persuade the player, speak with their clubs, and persuade ourselves that this is the player [we require].

So there is usually a lot of work, and it will be the same next season to stay competitive.”