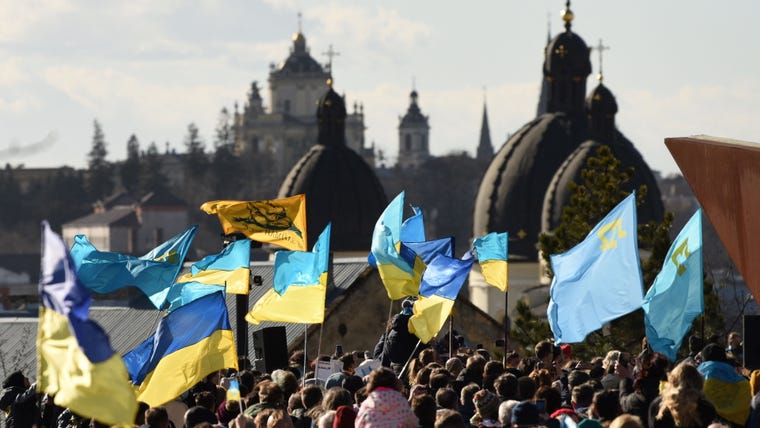 In an exclusive interview, Michael Obamina discussed his experiences throughout the continuing invasion.

Nigerian footballer Michael Obamina has spoken out about being stranded in Lviv, Ukraine, during Russia’s continuing invasion of the Eastern European country.

At the onset of Russia’s large-scale attack on its neighbor, Obamina, who plays for Rukh Lviv, was one of six Nigerian players living in Ukraine.

Obamina, who is currently unable to leave the city, has shared some of his experiences of the events he has witnessed since Russian president Vladimir Putin ordered military convoys to enter Ukrainian territory.

‘Everyone is just fighting for survival,’ Obamina he said. “It’s basically been one of the most devastating moments of my life and career.” “The Russians invaded the nation just a few days after we returned from our mid-season tour of Turkey, and it’s been pretty chaotic, really hectic these past few days.”

“Everyone is just battling for survival and trying to breathe, trying to obtain air, just to make it to the next day,” he added. “All we’re trying to do is live.”

‘Nearly the entire system is down.’
Lviv, Ukraine’s westernmost city, has become something of a refuge for Ukrainians fleeing the country, with the town’s proximity to Poland’s border making it a logical stop-over place for those wanting to enter into the European Union.

“Right now, the country is in a state of emergency,” Obamina continued, “and nearly the entire system is down.” “Everything is shut down; the only systems that are operational right now are hospitals, possibly grocery stores, and a supermarket that is only open in the morning to acquire food.”

“You witness a lot of casualties when you go out,” the 18-year-old added. “There is a lot of dread, worry, and accidents going on both inside and outside the city.”

“People are desperate to get out of the city and into the country, and there are road fatalities.” It’s insane.

“We tried to escape out a lot of times, but we’re stuck here right now.”

The coronavirus epidemic foiled the club’s original attempts to bring him to Europe from Nigeria in 2020, and the youngster has yet to make his senior club debut.

Vic Solomon-Otabor, a London-born Nigerian player on the books of Rukh Lviv, has obtained safe passage back to the United Kingdom among the other Nigerian players residing in Ukraine at the commencement of the invasion.