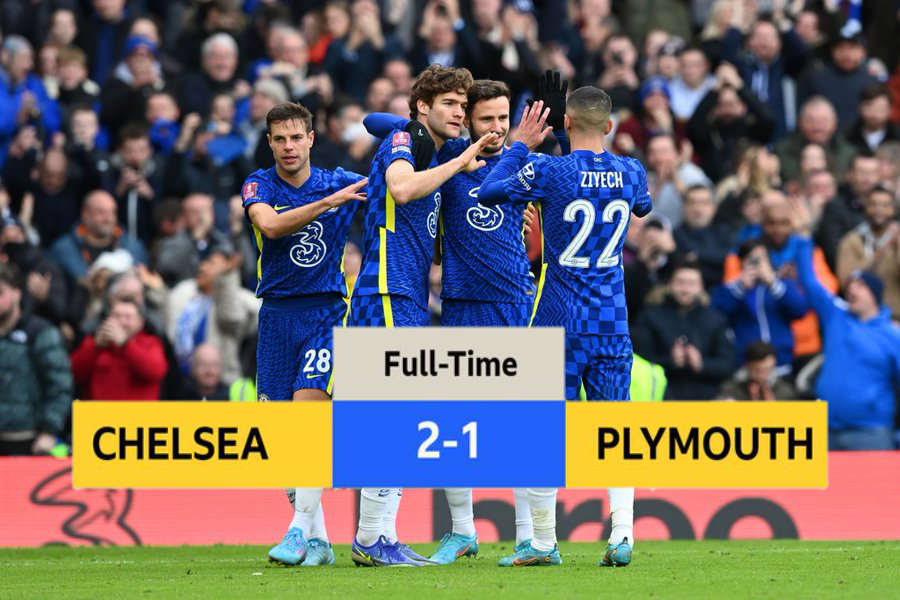 The Blues, who were expected to cruise to victory against the lower league club, struggled in the opening half of the match.

Plymouth Argyle stunned Stamford Bridge with an early goal in the eighth minute from Macauley Gillesphey, who made it 0-1 with a header.

Chelsea struggled to make anything happen despite all of the pressure they were under moving forward and the possibilities they had created, but nothing got past the goalkeeper.

Cesar Azpilicueta equalized in the 41st minute with a superb finish after Mason Mount assisted him, bringing the score to 1-1as the game progressed

After 45 minutes of play, the first half ended with Chelsea 1-1 Plymouth Argyle, resulting in a 1-1 stalemate at halftime.

Both teams struggled in the second half, which was expected to last another 45 minutes in order for the Champions of Europe to triumph.

Chelsea continued to control the game as it progressed, but they were unable to score the goal they so desperately needed.

Plymouth Argyle manager Thomas Tuchel was ruled out of the match before it started after testing positive for Covid.

The second half came to a close with no goals scored, leaving Chelsea 1-1 Plymouth Argyle with extra time on the horizon for both teams.

The game was starting to resemble Manchester United vs. Middlesbrough, with the lower-league side winning on penalties.

Chelsea had to make sure they didn’t lose, and their efforts paid off in the 105th minute of added time, when Marcos Alonso scored a calm goal to make it 2-1.

Chelsea’s destiny was sealed when Kepa Arrizabalaga made an incredible stop from the penalty spot in the 117th minute, resulting in a 2-1 victory and progression to the next round.