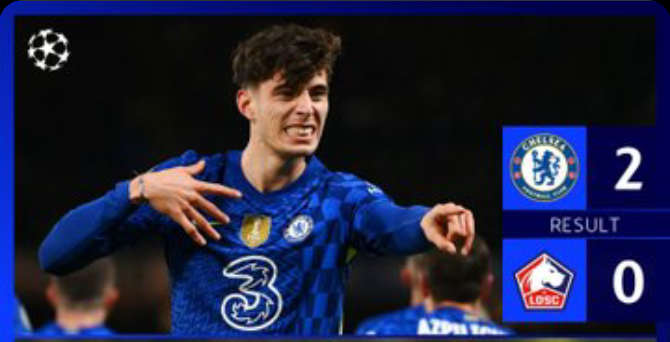 Chelsea defeated Lille 2-0 in the UEFA Champions League thanks to goals from Kai Havertz and Christian Pulisic.

The first half was not horrible for either team, who did well enough to make it count despite the abundance of opportunities.

Lille hung in there well, as Kai Havertz had a chance to score early in the game, but Leo Jardim made a fantastic stop to prevent the ball from going in.

It was meant to be, as the subsequent corner gave Chelsea a 1-0 lead, with the German scoring off Hakim Ziyech’s delivery in the eighth minute to give Chelsea the lead.

As they approached the final few minutes to be played between them at Stamford Bridge, more came through but nothing occurred.

Chelsea 1-0 Lille concluded the first half with the Champions leading by a single goal as they both stepped inside for the halftime break.

The second half was once again laden with so much coming from both sides as they continued to create more possibilities.

Chelsea were solid at the back and attacking as they attempted to terminate the game knowing they had another huge game coming up against Liverpool at the weekend.

Lille performed well this time to avoid conceding early despite being under siege from an opponent who had more possession of the ball.

As the game went, nothing happened, and the game ended with Chelsea 2-0 Lille, giving the Blues a comfortable lead heading into the second leg in France.