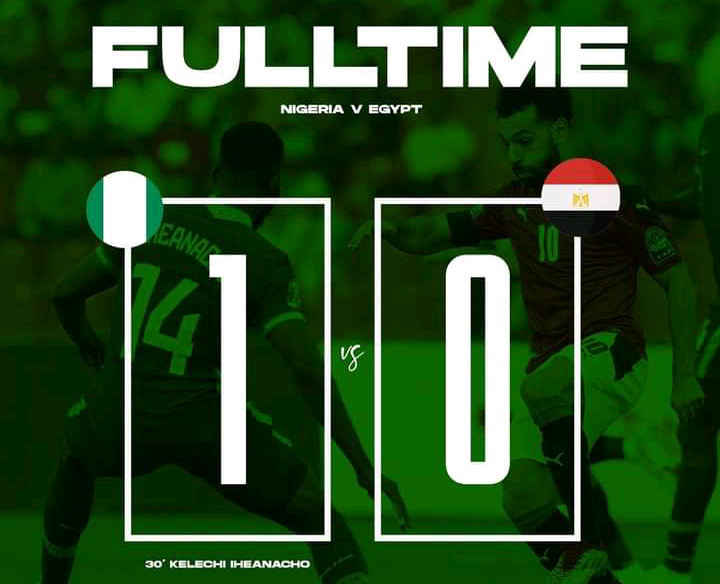 Nigeria defeated Egypt 1-0 in the Africa Cup of Nations opener, with Kelechi Iheanacho scoring the only goal.

Both countries had a strong first-half performance in the Africa Cup of Nations group stages.

Egypt started the game the better of the two teams moving forward, putting a lot of pressure on their opponent, but nothing came of it.

Nigeria held things together until they took control of the encounter, dominating the proceedings as they surged forward in search of a breakthrough.

Kelechi Iheanacho scored a stunning goal in the 30th minute after receiving the ball from Joe Aribo and finishing in style to put Leicester City ahead 1-0.

The goal was decisive in the first half, and the game continued with more possibilities being produced throughout, keeping both the defense and goalkeepers on their toes.

The second half got off to a fast start for both teams, who were up to the challenge at hand and progressed at the same rate as the game’s tempo.

Egypt keeps trying everything they can to make a comeback in the match, but every chance they get is squandered by their opponent, who isn’t joking.

Nigeria got their game going when the coach had to make some front-line changes, which included Villarreal forward Samuel Chukwueze coming off after a bad day.

As they entered the final ten minutes of the contest, things were looking bright for the home team, who were still in the lead.

The match ended with Nigeria winning 1-0 over Egypt, giving the host team all three points in their AFCON 2022 opener.

Take a look at the highlights below.