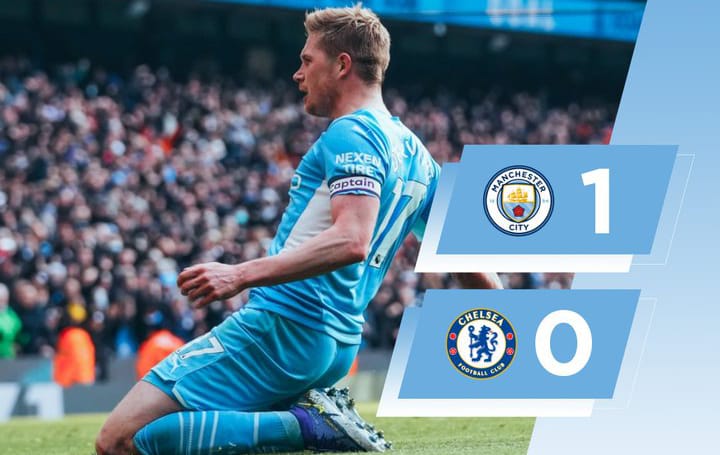 Man City beat Chelsea 1-0, increasing their lead at the top of the table to 13 points, according to MySportDab. Kevin de Bruyne scored the game’s only goal.

Chelsea struggled to gain control of the game in the first half, which was a tragedy for them because all they could do was defend their lives.

Man City dominated them from every angle, attempting to break them down as the match progressed, with Pep Guardiola’s side completing the task.

As the first half progressed, more chances were produced, but the Blues were fortunate to avoid going down because they had yet to make any offensive attempts of their own.

Kepa Arrizabalaga continued to keep them from conceding, making some amazing stops during the game, and things were looking well for him.

As the first half went, nothing changed until Man City drew 0-0 with Chelsea, sending them into the halftime break goalless.

The Blues continued to put in a bad performance, still trying to claw their way back into the game, which was moving quickly and they were struggling for control.

Chelsea struggled to get much done, but they did manage to make several attempts that didn’t cause any difficulties because Mab City had covered everything up.

As the one-hour mark approached, the score remained 0-0, with City dominating the proceedings.

Kevin De Bruyne made it 1-0 in the 70th minute following an incredible effort that saw Joao Cancelo set up the Belgian for a goal from a beautiful finish.