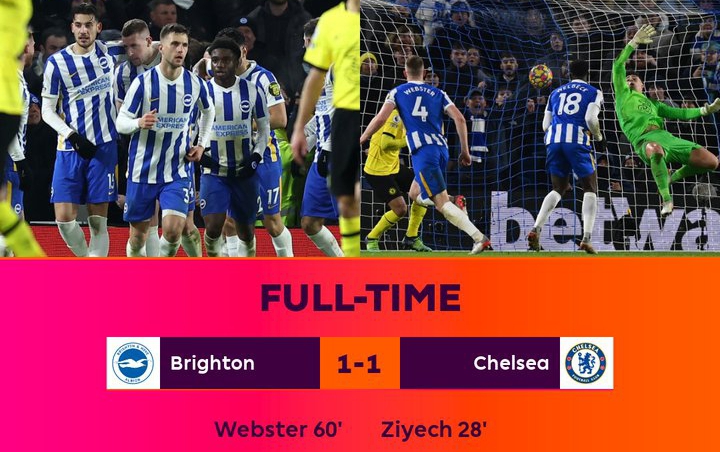 Chelsea drew 1-1 with Brighton And Hove Albion in the Premier League, with Hakim Ziyech scoring.

The first half of the match was exciting, with both teams pushing forward, but after 45 minutes, only one side was able to have an impact.

Chelsea had a poor start to the game, putting them under a lot of pressure, but they were able to hold back and prevent their opponent from scoring.

Brighton And Hove Albion were looking excellent until the Blues gained control of the game, controlling possession and aiming for an early lead, which they didn’t get as the game went.

The game’s first goal came in the 28th minute, thanks to a great assist from NGolo Kante, who set up Hakim Ziyech to score the Blues’ first goal, making the score 0-1.

More chances are being produced, but nothing appears to be happening as both teams continue to waste opportunities and do little to change the scores.

The second half was excellent, just as it had been for the opening 45 minutes of the game, which saw goals scored as the game progressed.

Chelsea looked good with the advantage, but they struggled to keep things under control in the second half against a team that was pressuring them.

Brighton And in the 60th minute of the second half, Hove Albion equalized when a powerful header from Adam Webster found the back of the net, bringing the score to 1-1.

Despite the several possibilities produced going forward in a game that was quickly becoming a losing one for Thomas Tuchel, nothing happened.

Brighton and Hove Albion drew 1-1 with Chelsea, putting the Blues two points behind in the Premier League title race.