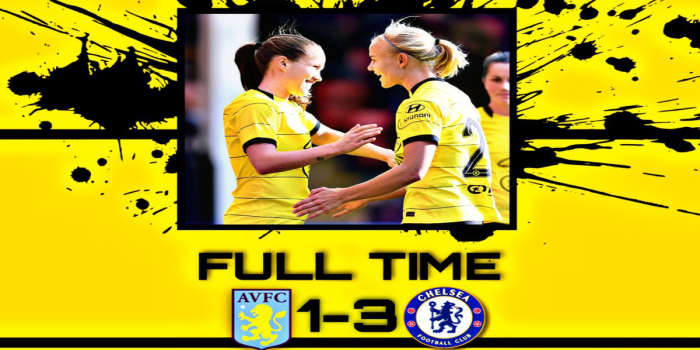 REPORT ON THE COMPLETE MATCH

Both teams started the first half at a breakneck pace, searching for the game’s first goal. Chances were created, but none of them could get past the defenders or goalkeeper, who made sure of it.

Aston Villa Women were looking excellent until Guro Reiten scored the opening goal in the 17th minute after an incredible cooperation effort saw the forward take advantage of the opportunity to make the score 0-1 for the Blues.

Chelsea’s unstoppable dominance continued as the game progressed, with Pernille Harder converting from the penalty spot to make it 0-2 in the 27th minute after Guro Reiten was pulled down by the Villa’s and a foul was instantly granted.

The game was still going in the same direction as it had been in the first half, with the visitors dominating and attacking, causing so many issues for the Aston Villa women to keep up with as the game progressed.

Guro Reiten earned her brace in the 62nd minute of the game, after Fran Kirby crossed the ball to the Norwegian, who rifled it past goalie Hampton to make the score 0-3 for the visitors as the game progressed.

Lauren James was introduced into the action, and some other children made their way onto the pitch for the remaining minutes to be played by both teams, with the scoreline being good enough to conclude the way it was.

After a nice buildup, the home side got a consolation goal in the 90th minute plus extra time after a good buildup saw them create something and score to make the scoreboard 1-3.

With a score of 1-3, Aston Villa Women were knocked out of the Vitality FA Cup fourth round, while Chelsea advanced.

CHECK OUT THE HIGHLIGHTS BELOW: