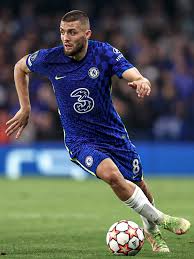 Mateo Kovacic of Chelsea for the Premier League Goal of the  Month award in January 2022.

In the month under review, the 28-year-old African put in a strong showing for the Blues, scoring against Brighton & Hove Albion and Tottenham Hotspur.

His magnificent strike against Spurs, though, was chosen for the individual award.

Ziyech curled a beautiful effort from outside the area that dropped just in time to slide inside the angle of the post and crossbar, leaving Spurs goalkeeper Hugo Lloris stranded to the spot in the London derby.

“It was a good goal, I think it was a ten out of ten,” the former Ajax midfielder told the press afterward. 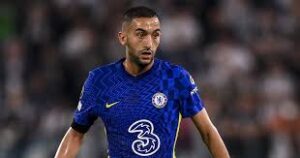 “I wanted to put it in the upper right-hand corner.” I wasn’t expecting it to go in right away when I hit it since I was following the ball. I felt I’d hit it a little too long, but I watched it go in in the end.”

Apart from Kovacic, the African star will compete against Kyle Walker-Peters and James Ward-Prowse of Southampton, Manuel Lanzini of West Ham United, Alexis Mac Allister of Brighton & Hove Albion, Richarlison of Everton, and Joshua Sargent of Norwich City for the prize.

The winner will be determined by a combination of fan votes and expert votes, and will be announced on February 4th.

Since his return to full fitness for Thomas Tuchel’s side, Ziyech has been a revelation for the reigning European champions.

Despite having 17 goals in 40 matches for his country, he was dropped from the Atlas Lions squad for the ongoing Africa Cup of Nations in 2021 after falling out of favor with current head coach Vahid Halilhodzic.

When he first snubbed Ziyech in September, the Bosnian tactician said that his patience with the player had been tested.

“For the first time in my coaching career, I saw a national team player who refuses to train and claims to be injured, despite the fact that tests show he can play,” Halilhodzic told the reporters.

“I’m not going to put up with it.” This will not be tolerated as long as I am coaching Morocco.”