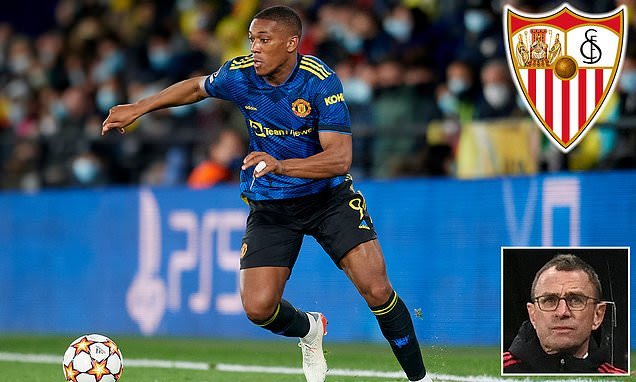 The Frenchman has stated his desire to leave the club during the January transfer window.

Ajokeonifaari confirmed thaManchester United has turned down an offer from Sevilla to loan Anthony Martial.

The Liga club is interested in loaning the French striker until the end of the season, but it is understood that their initial offer did not cover the striker’s salary, which United turned down.

United have not made a definitive decision on whether or not to loan Martial out in the January transfer window.

The player has expressed his wish to leave, but if the club decides to let him go, any agreement must cover his salaries as well as give a loan fee.

Sevilla’s offer to take the Frenchman on loan until the end of the season was reportedly refused since it only covered half of his pay.

According to sources, the Spanish side does not have enough money to pay all of his salary; their budget is estimated to be between €3 and €4 million.

After battling for game time this season, Martial has told Ralf Rangnick that he is searching for a fresh challenge.

Martial has asked to go when the transfer market opens, according to Rangnick, after his representative told Sky Sports earlier this month that the attacker would seek game time elsewhere.

“We talked for a long time. Rangnick said, “He revealed to me that he’s been at Manchester United for the last seven years and that he feels it’s time for a change, to go somewhere else.”

“I suppose this is understandable in certain ways.” I could follow his thinking, but it’s also vital to consider the club’s current condition. We have Covid times, and we have three tournaments in which we still have high hopes and want to be the best.

In 2019, Martial signed a new deal with the club that will keep him with the club until 2024, with a one-year extension option. While he had a strong season in 2019-20, he has battled for consistency this season, making only 10 appearances in all competitions.

Manchester United drew 0-0 with Newcastle in the Premier League on Monday, and he was left out of the matchday squad.