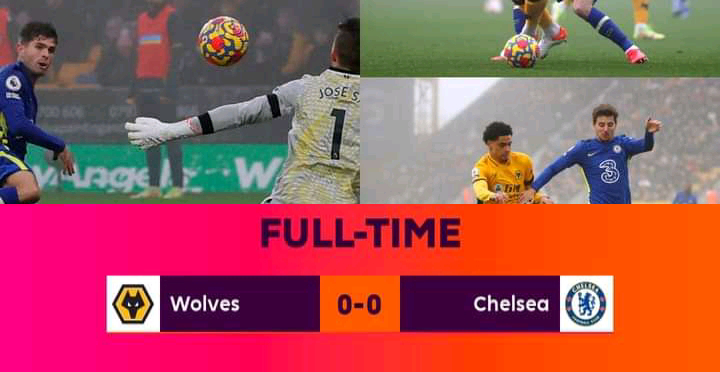 Chelsea were held to a 0-0 goalless tie against Wolves to retain third in the English Premier League table, according to Ajokeonifaari.

It wasn’t easy for the Blues, who had to go into the game knowing they didn’t want it to happen but were compelled to play it nonetheless, despite the fact that they were missing even more players.

The game’s outcome may have been different, but they had no choice but to accept it and return home to prepare for their next match, which will take place in the middle of the week.

REPORT ON THE MATCH BETWEEN THE WOLVES AND CHELSEA

Chelsea were dealt another blow ahead of kickoff when Kai Havertz tested positive for covid-19, ruling him out of the match, which was unfortunate given their lack of substitutes.

Wolves were the team that came out on top controlled the early going, pressing their opponent, who wasn’t particularly effective at defending as the game progressed.

The Blues were down in the 15th minute when Daniel Podence scored a goal that was later pulled back for VAR review and ruled out for offside after a few minutes of thorough investigation by the Video Assistant Referee.

The first half continued with increased pressure as the Londoners created an opportunity for Christian Pulisic to score, but he was unable to get past the goalkeeper.

Wolves held Chelsea to a 0-0 goalless draw after 45 minutes of play, which was not a strong showing for Thomas Tuchel’s team.

The second half was not looking promising, as it began in the same manner as the first 45 minutes of the match.

Wolves, who were playing at home, had the majority of the shots on goal and off target.

Chelsea looked a little better as they began to apply some pressure to their opponent, who appeared to be bewildered as they struggled to get control of the situation, while the Blues continued to drive forward.

The Champions of Europe had a chance to strike first, but Wolverhampton’s goalkeeper was up to the task, making a brilliant stop to hold the score at 0-0.

Christian Pulisic and Mason Mount both had great chances to make it count, but they failed to score, which would have given them at least a slight advantage as the game went.

The game didn’t produce much, as it ended with Wolves 0-0 Chelsea, which could have been a lot more, but they had to make do with what they had.