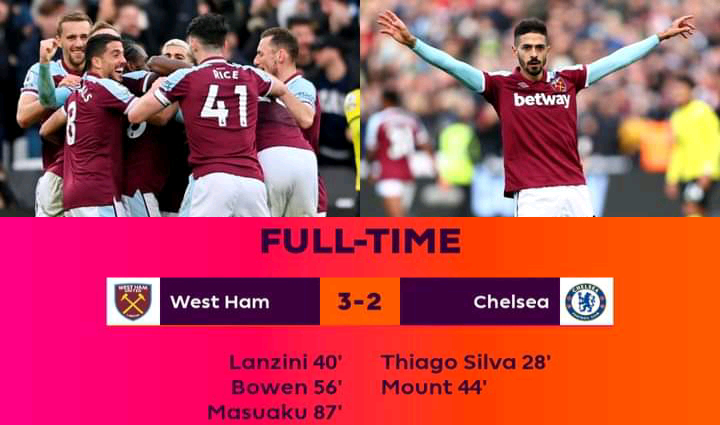 Both teams had it going well in the early few minutes of the game which didn’t see much happening from both ends.

Thiago Silva scored the opening goal in the 29th minute after the defender headed in to make the scoreline 0-1 for Chelsea.

The Hammers leveled back with Manuel Lanzini scoring from the penalty spot to make things 1-1 in the 40th minute for West Ham United.

Mason Mount restored the lead for his side in the 44th minute as the scoreline turned 1-2 in favor of the Blues who were dominating.

Chelsea made an early change as injured Kai Havertz was removed and Romelu Lukaku replaced the German.

West Ham United were the second best as the second half progressed further with them being dominated by the visitors.

Jarrod Bowen scored in the 56th minute to level things for the Hammers 2-2 after an amazing display saw him converting.

Arthur Masuaku finished off in the 87th minute putting his side on the lead after another error cost the Blues to go down 3-2.

The game ended with West Ham United 3-2 Chelsea after another disappointing display coming from the Blues.