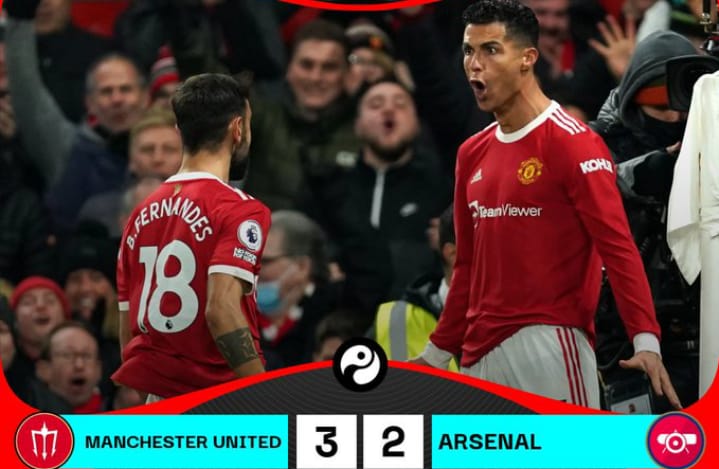 After falling behind early, Man United came back to defeat Arsenal 3-2 thanks to a brace from Cristiano Ronaldo.

It was a good first-half match, with both teams scoring one goal each after creating numerous chances on goal.

Emile Smith Rowe took advantage of a position inside the box in the 13th minute of the first half to score the game’s opening goal, giving Arsenal a 1-0 lead.

Man United appeared to be in control of the game, but scoring proved tough as the game progressed into the last parts of the half.

Bruno Fernandes ultimately equalized for the red devils in the 44th minute of the game, after combining with Fred, who had put him up.

After 45 minutes of sport, the first half finished with Man United 1-1 Arsenal and both teams heading inside for the halftime break.

Manchester United played well in the second half, ensuring that they completed the task against Arsenal without wasting any time.

Arsenal looked as excellent as they did in the first half until Cristiano Ronaldo scored in the 53rd minute, giving the home side a 2-1 lead with an assist from Marcus Rashford.

As they entered the final few minutes of play, more opportunities continued to come from both sides, with nothing separating them from each other. 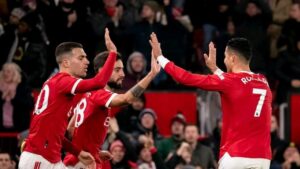 Cristiano Ronaldo scored his 800th career goal from the penalty spot in the 70th minute of the match to make it 3-2 for his team.

The game came to an end with Man United 3-2 Arsenal as Manchester United claimed all three points which enable them moved to the top in the Premier League table.