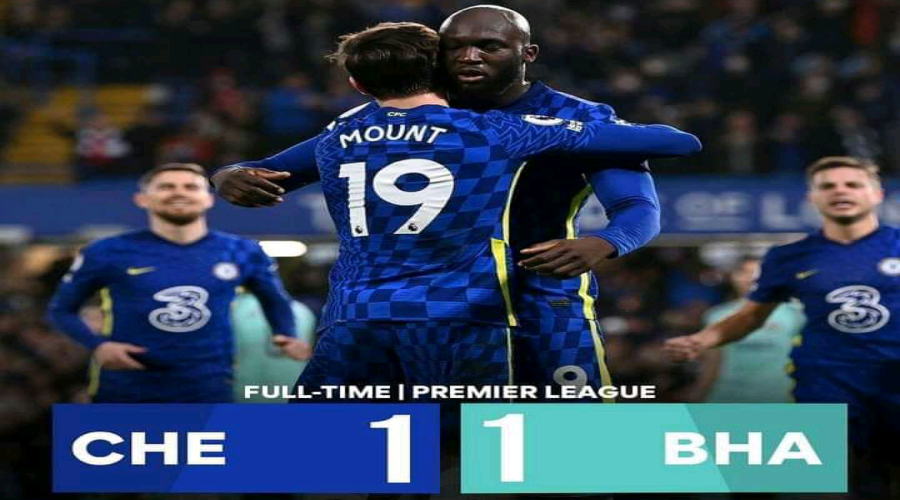 Chelsea were held to a 1-1 draw by Brighton And Hove Albion, dropping two points.

It was a good first half match, with both teams playing good football and creating chances.

Chelsea did not have a good start to the game, as their opponent had more ball possession, but this did not cause the Blues to lose sight of their defense.

Brighton & Hove Albion is a football club based in Brighton, England. When Tariq Lamptey caught Reece James, the player was injured and had to be replaced by Marcos Alonso.

As the game went, Romelu Lukaku scored an incredible goal in the 28th minute, heading in a Mason Mount cross from a corner kick to put the score 1-0.

Andreas Christensen got injured and had to be replaced by Trevoh Chalobah, another injury concern for the Blues.

There was no action after an incredible 45 minutes that saw both teams headed into halftime, the first half concluded with Chelsea 1-0 Brighton.

The second half continued with both teams rushing forward at a breakneck rate in an attempt to reverse the result, which was already stacked in favor of the home club.

Brighton And Hove Albion are still in possession of the ball but are finding it difficult to break down their opponents, who continue to put up a strong defense in order to avoid conceding.

Chelsea players were receiving yellow cards as they attempted to maintain their lead while also keeping in mind that one more goal would give them all three points.

As they entered the 70th minute, the score remained 1-0 in favor of the Blues, with further yellow cards being issued all the way of the opposing team

Danny Welbeck’s late stunner in the 90th minute plus added time leveled the score at 1-1 with a precise strike.

After 90 minutes, the match ended with Chelsea 1-1 Brighton And Hove Albion, with both teams sharing the points.