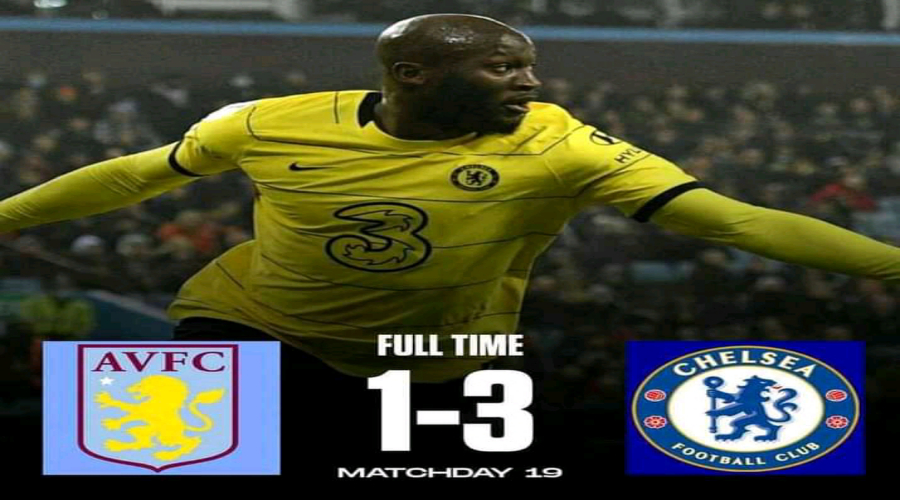 Chelsea came from behind to beat Aston Villa 1-3 on Boxing Day, according to MySportPlug. Jorginho scored a brace and Romelu Lukaku scored one.

The match between Aston Villa and Chelsea began with high pace from both ends of the pitch, with the Blues taking control of the ball possession early in the game, which aided them.

As the game went, both sides received a number of opportunities, but neither could convert them because the defenders were on high alert, clearing the danger they faced.

Aston Villa took the lead in the 28th minute of the first half when Reece James pushed the ball into his own net following a misjudged cross, making the score 1-0 in the home team’s favor.

Chelsea were disappointed, but persisted with the game in the hopes of quickly responding after going down in such a manner after ensuring that everything was under their control from the start of the game until the goal was scored.

Jorginho finally equalized for Chelsea in the 34th minute of the first half when the hosts were awarded a penalties, which the Italian took and converted to make it 1-1 as the game went.

It didn’t look good for the visitors, who needed a positive result to have a chance of challenging for the English Premier League crown, which they were currently seven points behind.

The first half ended with Aston Villa and Chelsea tied at 1-1 at halftime, giving both teams all they needed to go on and seize the lead after 45 minutes of sport.

They both arrived for the second half of the game, forcing Thomas Tuchel to make an early tactical change, removing Trevoh Chalobah and replacing him with Romelu Lukaku.

As the game went, Aston Villa were able to keep the scoreline level, with the team wanting to keep things tight as they all fall back defending to ensure they don’t surrender anything that may be harmful to them.

The score remained 1-1 as Chelsea pushed forward in the hope of taking the lead until the 56th minute, when Romelu Lukaku scored to make it 1-2 with an assist from Callum Hudson Odoi.

Things were looking good for Thomas Tuchel and his team as they maintained their domination, pushing forward for more while defending their opponents with their lives.

After another penalty was granted, Jorginho stepped up and made it count against Martinez for the second time, making the score 1-3 in the 90th minute plus added time.

The match between Aston Villa and Chelsea ended with the visitors taking all three points after 90 minutes, reducing the gap between them and Manchester City to six points with them in third place.

CHECK OUT THE HIGHLIGHT BELOW