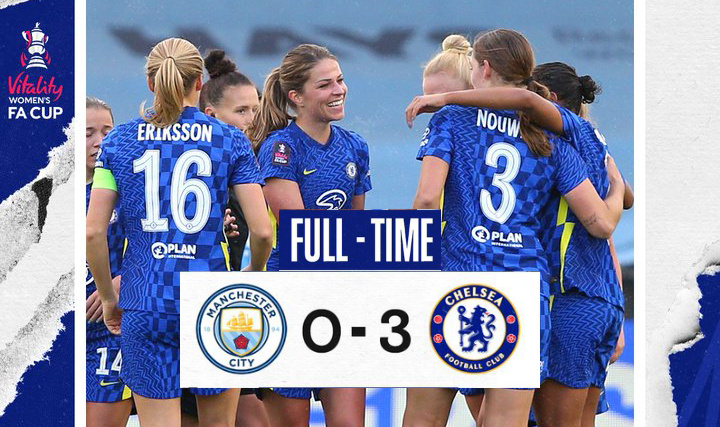 The game wasn’t that fun, but the Blues made sure they were able to orchestrate a win which will now see them play in the Women FA Cup final after getting a win against a formidable City side.

A good encounter for Emma Hayes as new signing Lauren James finally making her statement after being named on the bench for the first time since she sealed the move away from Manchester United. 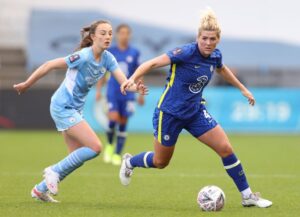 The game started out nicely for the visiting side for the day as they dominated things in the first half which turned out to be a perfect one for them.

Man City and Chelsea women didn’t find a breakthrough as the first 20 minutes of the game was all about both teams doing everything possible in making sure they score the opener.

Things progressed with Erin Cuthbert scoring the opening goal in the 23rd minute after Guro Reiten delivers a corner into the box which was finished off neatly to make the scoreline 0-1.

Man City were poor in making things go their way as another opportunity was converted by Chelsea in the 28th minute of the game, and this time it was Melanie Leupolz who made things 0-2 from a good finish.

The scoreline could have easily increased to 0-3 after Fran Kirby slides Samantha Kerr in but the low effort is saved by the legs of the City goalkeeper which was so close to a third goal for the away side.

The first half came to an end with Chelsea women heading into the break with a comfortable 0-2 advantage against Man City who did everything possible but couldn’t do anything about the scoreline.

Things continued to go in the favor of the London side who made sure their dominance remained despite them taking the lead in the game heading into the second half which was looking good.

More opportunities from Man City and Chelsea women who continued making sure things were a bit competitive despite knowing nothing could be done against the side who had the advantage going forward. 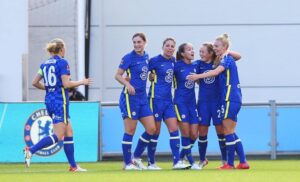 The match carried on into the final stages which saw Bethany England netting a late one in the 89th minute after a good pin point cross from Fleming saw the Englishwoman heading home to make it 0-3.

The encounter finished with Chelsea Women securing their place in the final of the FA Cup after knocking out Man City Women by a 0-3 result which was so much easy for the League champions.