One from Kai Havertz and two from Timo Werner both scored an amazing goal as Germany beat North Macedonia 0-4 in their FIFA World Cup qualifiers match away from home.

The encounter wasn’t that bad for the Germans who dominated things but the struggling was so much before things worked in their favor after so many opportunities were created going forward.

Timo Werner also started the match alongside Kai Havertz who got his name on the scoresheet after a lovely bit of play saw the former Bayer Leverkusen man smashing one home for his country.

Warner later grabbed a goal of his own in the encounter which saw him scoring in the 70th minute of the game with his also being assisted by Thomas Muller who helped Havertz to his goal.

The match was a good one for both Chelsea players who made their mark as Antonio Rudiger was ruled out injured ahead of kickoff due to back problems which couldn’t allow him to take part. 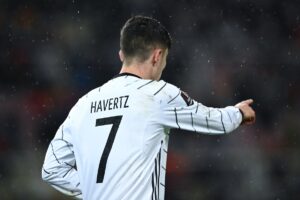 Timo Werner immediately made it his brace in the 74th minute which saw him finishing off neatly to extend the lead for Germany who carried out the remainder of the encounter dominating things.

Great goals coming from Timo Werner And Kai Havertz who were both one of the best players on the pitch of play in the match and their goal went a long way in showing their quality and why they were named in the starting lineup by the manager.

The next goals in this encounter went a long way in affecting the outcome of the final results with three points at stake which didn’t end in a draw in which both teams would have to settle for one point each.

Don’t forget to let us know what you think about this game as we have seen yet another amazing goal this evening as North Macedonia Vs Germany is currently proving to be an entertaining game in the FIFA World Cup qualifiers. 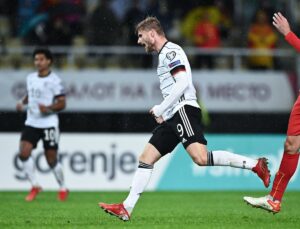 These goals we witnessed here did go a long way in determining who gets to walk away with all these points here as we didn’t witness a comeback and end the tie in a draw which won’t be good for both teams.

You can also check out other goal alerts and match highlights from related posts below or click on the homepage to enjoy more from us, your home for entertainment news, and football activities.