Thomas Tuchel is working very hard to ensure new signing Saul Niguez blend in as quickly as possible with Aston Villa coming next for the Blues in the England Premier League.

Chelsea have organised an in-house friendly game at Cobham today which will be played between the first-team players not selected for international duties and others from the Premier League 2 team.

However, the likes of Kepa Arrizabalga, Trevoh Chalobah, Ben Chilwell, Marcos Alonso, Callum Hudson-Odoi, Hakim Ziyech, Ruben Loftus-Cheek, and Saul Niguez will be taking part as they have been training since the International break. 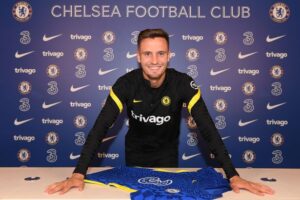 Meanwhile, other players who are yet to secure a loan move away from Stamford Bridge have been training at Cobham also and will be taking part in the in-house friendly encounter which will be played later today.

Thiago Silva is also with the team after not being released by Chelsea for Brazil’s World Cup qualifiers because the South American country is currently on the UK Government’s red list which would have led to player missing training and games due to quarantine.

Here Is What Thomas Had To Say About Thiago Silva Not Being Released By Chelsea:

“If Thiago goes to a red list country,” Tuchel explained last week, “he will play three times, come back and then sit in a hotel. That would have cost him three matches without any training.

“So in our five-match schedule, he would be able to play just two matches for us and then go back on an international break in October.

“For us, a player that is paid to play for Chelsea, this cannot be the solution. Clearly not. So we were absolutely shocked about the situation at first and confused, and now I am very happy because things are clear and it can only be like this.

“The club needs to get protection on this subject, the club pays the players and the players are here and need to be safe in these crazy times. I can understand the needs of the national teams but we need to find other solutions.”

The in-house friendly match will give many players the chance to get some playing minutes as they are yet to feature for the Blues heavily since the beginning of the season which includes the likes of Ben Chilwell amongst others.

Thomas Tuchel Had This To Say About Them:

“For Ben Chilwell, it’s very easy, He came back with the latest group from his summer break. When he arrived, Marcos Alonso had five weeks in his legs from pre-season. He played the first competitive matches and was simply way more ready physically.

This was natural because of the training session and his fantastic games. – “He played the Super Cup final and three Premier League games. Also, we only have three substitutions allowed.

And this is a huge problem, a huge, huge disadvantage in the European competitions for any English team. – “We play in the toughest league in the world but only have three in-game changes allowed.

Thomas Tuchel also had to explain why Ben Chilwell can’t be rushed into starting games over Marcos Alonso who remain the appropriate man to play the position between both of them as one have more training and game time than the other.

“So you can’t say after 60 minutes, ‘Ben, I’ll give you 30 minutes now so you’re ready to start the next game’. You can’t say, ‘let’s see with Thiago how long he can go’. It’s simply not possible.

“Everyone who went further in pre-season is very strong physically. This is the only reason. 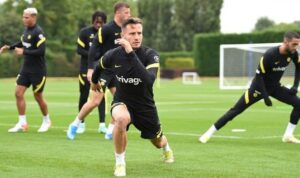 “But look at how Thiago played today, he was excellent. I could feel he was absolutely ready in the last week. I’ve known him a long time now, he made a huge step.

“Chilly needed his time in training to adapt to the intensity. He is ready now but him facing Liverpool wasn’t the moment to push him into the cold water.”

After the International break, Chelsea will go up against Aston Villa as they continue their English Premier League run and looking forward to the Uefa Champions kickoff which they have to defend their title.