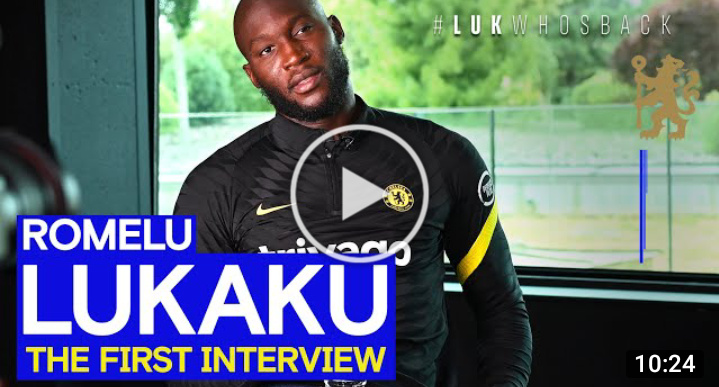 Chelsea new signing Romelu Lukaku have been unveiled by the club and he has given his first interview which saw him sharing his experience coming back into the club.

The Blues reached an agreement with Inter Milan for a transfer fee of €115 million which saw him went for medical and he was unveiled by the club after successfully passing everything to sign his contract.

Romelu Lukaku has completed his move to Chelsea from Inter Milan, he will be looking to meet the rest of his teammate after already meeting injured Hakim Ziyech who he confirmed to have a chat with and also being added to their WhatsApp group.

His first interview as a Blues has been granted and he confirmed message he got from the manager Thomas Tuchel who wants him to be a presence and a leader in the team which he wants to build around him this season.

SEE WHAT ROMELU LUKAKU HAVE TO SAY:

When asked about his coming back to Chelsea and how have things changed in the past seven years since he left, and he had so much to say about the club and meeting his new teammates.

‘The building has got bigger but it’s always looked this good! I’m very happy to be back. It’s good to be around the people and see a lot of familiar faces so I’m looking forward to getting to work with the team.

‘I’ve seen Hakim Ziyech so we had a little chat and I’ve been added to the WhatsApp group but I’m waiting to see the rest of the players tomorrow.’

Big ROM went on talking about the Chelsea win against Crystal Palace which ended 3-0 with goals from Hakim Ziyech alongside Christian Pulisic and Trevoh Chalobah.

‘It was a good win and the manner in which we won with a dominant 3-0 scoreline and creating a lot of chances. We also pressed and recovered the ball high. We didn’t really get into any problems so it was good.

‘Hopefully we can keep that level of performance up. We’re going to have to because the Premier League is very difficult but I’m looking forward to this challenge.’

When asked what is the difference between the old Romelu Lukaku who joined Chelsea as a teenager and the new player he is coming back with so much experience.

‘I just want to try to help the team win and be available for the manager as well as for my team-mates. I want to make sure that they feel comfortable and they can lean on me in whatever situation we’re in.’

Romelu Lukaku went on sharing more manager Thomas Tuchel and how he intends to help the team in their quest for Premier League glory after coming off winning the Italia Serie A title with Inter Milan.