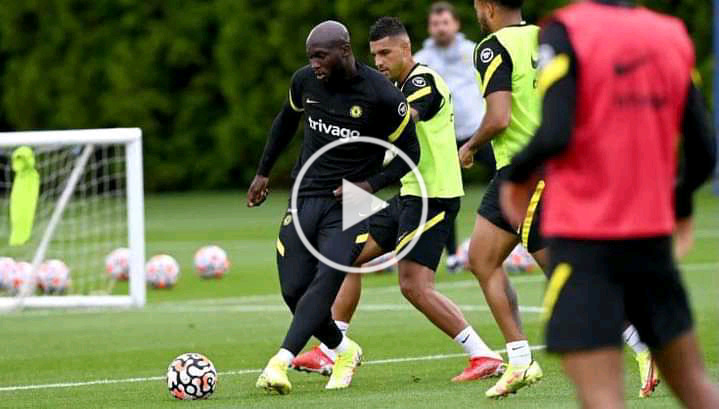 Romelu Lukaku has now completed his first Chelsea training session with his new teammates after making a return to the club he once played for some years ago.

Lukaku trained at Cobham for the first time since his £115 million transfer from Inter Milan was confirmed with the player undergoing medical and signing his contract for the second time as a Blue.

Chelsea went through series of delays in the process to reach an agreement with Inter Milan for the Belgian as their first offer was rejected which included them adding Marcos Alonso and €100 million.

Another bid of €115 million was agreed upon between the two clubs as Romelu Lukaku completed his move back to Stamford Bridge for the second time in his footballing career after a failed first stint with them.

The striker yesterday gave his first interview as a Chelsea player which saw him talking about his return and how the manager wants him to be a leader in the team which is filled with so many younger players.

Lukaku have been a target for a long time for the Blues after he left them, Antonio Conte tried to sign him but failed and got Alvaro Morata instead which didn’t end up well as he struggled before he was loaned out and sold.

With him finally making a return to the club he will be looking to make himself a leader at the front with them banking on him to deliver the goals Timo Werner have failed to bring after making his move from RB Leipzig.

Chelsea wanted to sign Erling Haaland from Borussia Dortmund, but the deal was too hard to agrees upon as they had to go back and bring in a familiar face instead of advancing with a €175 million move for the Norwegian who is in top form.

Tammy Abraham also completed his move to Roma earlier today and the Belgian will be wearing the number 9 shirt left by the England international who is now elsewhere with a new team after lifting the Super Cup title.