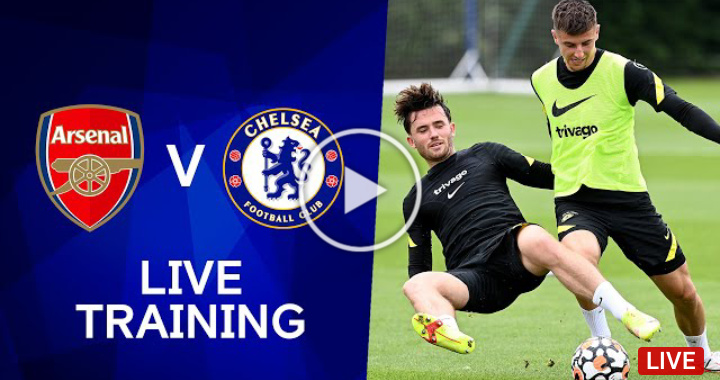 Chelsea are currently training live which the fans will be getting to see Romelu Lukaku’s first training after one was done yesterday behind closed doors.

The Blues will be taking on Arsenal this weekend in the English Premier League encounter which will be their second game of the season that will be played on Sunday.

Chelsea last game against Crystal Palace ended with a 3-0 win as Christian Pulisic alongside Marcos Alonso and Trevoh Chalobah as they out classed their opponent all through.

Romelu Lukaku could be making his debut against Arsenal after taking his first training session with the team yesterday and he is up today for another round of training.

Thomas Tuchel is ready to unleash the big striker as quickly as possible with him looking to arrange his team so he knows he regulars and those who will be dropped.

Chelsea are also doing a major clear out as many players will be leaving before the summer transfer window closes this month end as they also need more funds to recover after selling.

Emerson is set to make a move to Lyon while Zappacosta will be heading to Florentina as both defenders will be making it a permanent deal with their place not secured.

Tammy Abraham recently made a move to AS Roma as Batshuayi and IK Ugbo are also set to be making their moves too which could be a permanent or loan switch depending on the club’s final decision.

Armando Broja who recently extended his stay was loaned out to Southampton despite him being promised to get more game time ahead of the new season which seems not to happen.

It now left for Romelu Lukaku and Timo Werner who will both be fighting for that number 9 position which is the Belgian’s who came in for a record-breaking fee.

The team are currently training ahead of their Arsenal clash which will be going down this weekend as both sides will be looking to grab a win and all three points.