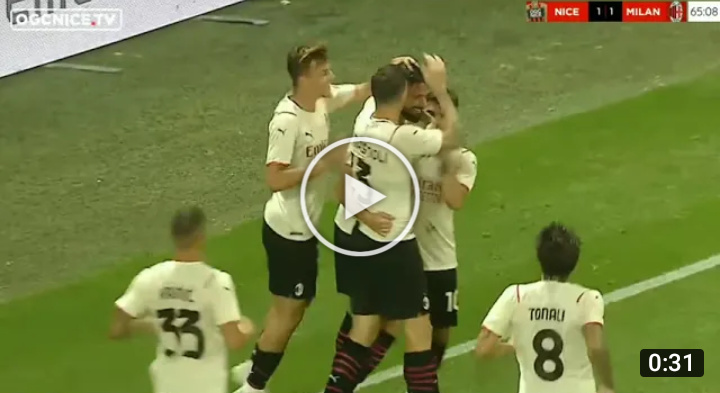 Olivier Giroud gets his first AC Milan goal as he came on as a substitute and equalized for them in their preseason match against French side Nice which ended in 1-1.

The former Chelsea player has shown his quality once again as he will be playing for AC Milan ahead of the new season after making a move away from England where he won the Uefa Champions League title.

So much more we can talk about the amazing goal scored by Olivier Giroud who has been fantastic so far but overlooked due to his age as he has always come on and show what he is made off.

What a fantastic goal from the France International who gets better with age as he recently just come back from a disappointing Euro 2020 Championship where he didn’t get much playing time with the team.

His move to AC Milan was based on him getting more game time as Thomas Tuchel hardly gave him the playing time he need which cost him seating on the bench for France during the European Championship.

This goal scored in this game goes a long way in proving Olivier Giroud is not done yet as more is still coming for him ahead of the new season which he will be playing alongside Zlatan Ibrahimovich.

Once again just enjoy the amazing goal which you can watch below and don’t forget to subscribe to the YouTube Channel and drop your comments which will be full appreciated. Thanks.