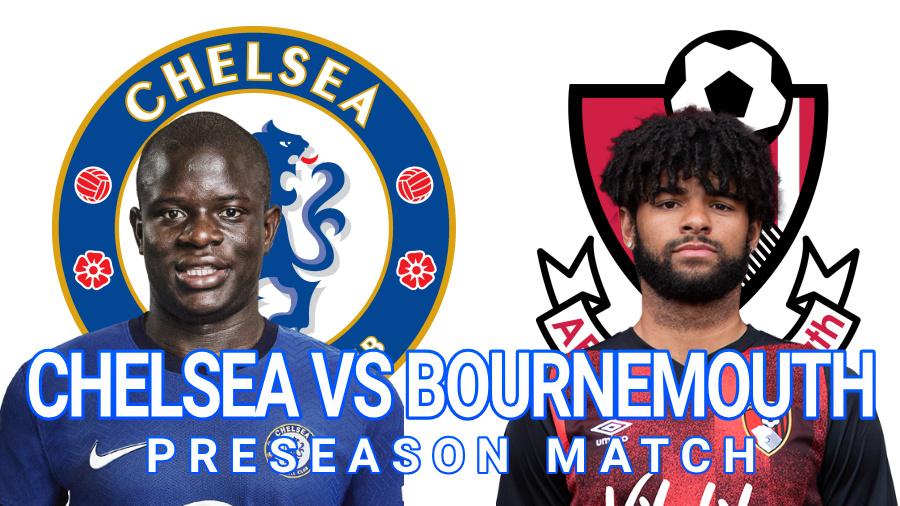 Chelsea Vs Bournemouth Preseason match will be going on today and this time fans gets to watch the Blues for the first time as they play later today.

Thomas Tuchel’s side was disappointed learning their match against Drogheda was canceled due to a coronavirus case in the camp as the team had to play against themselves for 90 minutes.

The team are now back in England and it will be a Chelsea Vs Bournemouth Preseason game up next before they will be going up against Arsenal and Tottenham in the final stages of their preparations.

This game will be Thomas Tuchel’s second game after they played a 6-1 win against Peterborough in a match which saw Hakim Ziyech getting a hat trick as Broja, Tammy Abraham also scored.

The team also recently welcomed some players back who represented their Countries at this year European Championship which was won by Italy National team who have Jorginho And Emerson.

The likes of Timo Werner, Kai Havertz and Rudiger of Germany recently came back, while NGolo Kante and Kurt Zouma of France also made their way back into camp – Chelsea Vs Bournemouth Preseason.

Big names likes Thiago Silva who led Brazil to Copa America final and Cesar Azpilicueta of Spain are also missing for now as they still are on holidays and expected to be back in the coming days or week.

For now Thomas Tuchel is still experimenting with the team as most of the back from loan and Academy players have been tested in their last game against Peterborough which they won 6-1.

Chelsea Vs Bournemouth Preseason might be a different game which might see some returnees from Euro 2020 gets to get a taste of action once again but the manager is known for not changing his plans that much.

But some few changes might be made late in the game with Thomas Tuchel looking to test as many players as possible before the next friendly game against Arsenal coming up.

With Chelsea Vs Bournemouth Preseason game going on, the Blues are currently in the market searching for a number 9 while some players are also linked with a move elsewhere.

Erling Haaland still remains the priority as Chelsea are making a new plan which will see them make a €130 million bid for the striker and if it is rejected they will be looking to include addons that could see it rise to €150.

On to some other transfer news, Tammy Abraham is being wanted by Arsenal as they look to sign the England International who might likely not see game time if Haaland arrives the club.

Time: 19.45 Uk Time And 7:45 Pm Nigerian time and u can also check for your location where u will be watch from as the game will going on live for everyone to watch.

Don’t forget to follow us because we will be giving u live updates about the game that will be going down later today.